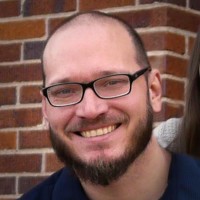 Here are some highlights from our recent progress on the house. We have the footings poured! We praise God for each step.

The basement is dug! After months of building character shoveling by hand we rented a skid steer to finish the basement. I’m sure we will have plenty of other opportunities to build character as we build the house.

There have been many who helped in this beginning stage of construction. Josh, a friend, student and our most recent addition to Tentmakers, helped pick up and return the bobcat. Orrin, another friend and student, helped run the skid steer and show me the finer details of how to use the machine.

It quickly became apparent that we would not have enough room for the dirt we were bringing out. Bruce, a friend from LaGrange, who is also working on a construction project, could use the fill dirt. While there he used his excavator to dig down to the depth we needed to dig. From that section I could more easily use the skid steer to clear dirt from the rest. Bruce also used the excavator to bring dirt out along the west side of the basement. It was amazing to watch how skilled he is in operating the huge machine. Jeff, a friend who is on staff at Frontier, stopped by almost daily to check on progress. He also helped by letting me use his laser level.

As I think of how each of these men contributed, it is obvious that I could not have done this without them. It is humbling to see that when the Lord builds the house, he uses His people to help.

We have many others to thank. Hopefully, in the upcoming weeks we can tell some of the stories of how God has been working to get us to this point. For now, we hope you enjoy the video and share in our excitement as we begin this adventure.

We are thankful to be approaching spring!  We had about a week that felt like spring before the giant storm with record-breaking snowfall!  Now we’re anxious for it all to melt so that we can get to work on the house!

For those who maybe didn’t know, we have been hoping and planning to build a new home on the property God blessed us with about two years ago.  We began digging last summer and collecting some materials.  We’ve been getting excited about deals on doors, windows, siding, shingles, and more, but we’re about to get down to the real work!  Chuck will soon be finalizing the house plan and getting the Insulated Concrete Forms that we will use for the exterior walls!  This is the main thing on the horizon for spring / summer, but in the meantime…

We’ll finish up this school year at Frontier School of the Bible.  It’s been a good year with Chuck teaching more missions classes, Connie teaching English and Christian Women’s Practices, Connie directing the FSB Choir and Drama team, and as a family hosting lots of students for Indian food nights and game nights (times when it has been abundantly obvious that we need a bigger space)!

We’ll wrap up our own year of homeschooling a 10th-grader, 7th-grader, and two 4th-graders!

Chuck will complete his first year as director at Tentmaker’s Bible Mission.

AND we’ll get to spend more time with family as Chuck’s brother (with his wife and four daughters) will be moving here to LaGrange!

Also, this summer, we will do just a little traveling.  Chuck is the speaker for two weeks at a Bible camp in Colorado in July.  It might be hard to step away, but by that time we may need a break from working on the house anyway!

We would appreciate your prayers for the ongoing ministry here as well as for our new house project.  It’s already been amazing to see God provide and we’re trusting Him as we move forward to attempt each next step while staying free of debt.  And just a note – we love input (as this is all new to us), so if you have interest in or experience with home-building, we’d love to hear your advice!

Thank you for praying with us, and for your support of us in every way!  As always, write or call with any questions and also to share with us about your lives, and ministries, and prayer needs!

In Christ  ~  chuck, connie and family

Praise God along with us for…

The past few weeks have been exciting as we look to our future ministry with Tentmakers Bible Mission.

During our TBM board meeting at the beginning of May, I was surprised by a request from the board. They asked me to step into the position of Assistant Director with the intention of transitioning into the role of Executive Director in three years. That will allow me to finish the training resources I am working on now. I am also excited to see how God will grow and develop me during this time, preparing me for this next step in ministry.

Connie and I strongly feel God’s leading to accept the board’s proposal for me to become Assistant Director. We are humbled that a group of men we so deeply respect would see potential for me to take such a role in the mission.

Connie and I are so grateful for this opportunity and will seek to walk worthy of His calling. Please pray with us as we plan and prepare for this new task before us!

Download a letter from Ron Thompson and Charlie Hornik The latest picture of our TBM board members. I am excited to serve with such incredible, godly men. I am confident of the future of TBM with an amazing board that spans multiple generations.

Hello from Windy Wyoming. So much has happened already in 2018. Here is a quick rundown of what is going on and (more importantly) ways you can pray for us.

Frontier School of the Bible

Life at Frontier rarely slows down. It is always exciting. In February we had our Spring Mission Conference. Since then, I’ve been meeting with various students who are participating in Spring Break Mission trips. My New Testament Survey class has gone really well. I am very impressed with this group of Freshman students. We’ve had fun looking at New Testament literature and geography. We’ve also spent a lot of time singing. This year I have three songs: the Chronology of Acts (to the tune of Gilligan’s Island), the Number of Chapters in each book (to the tune of the Addam’s Family), and the NT Book Summaries (to the tune of Happy Days). Needless to say, I’ve had fun.

Connie has also been busy. She had the opportunity to speak at the student wives meeting. She also leads a weekly prayer group and meets with students numerous times during the week, working with students who have specifically approached her for discipleship.

This past month we became members of LaGrange Bible Church. Being a part of this fellowship has been a blessing to our whole family. We’ve had the privilege of leading worship and I am currently working on redesigning their website (please pray that I can wrap it up soon).

Much of Connie’s day is spent teaching. This past year she has been teaching a weekly reading and English class for many of the homeschool kids in town. There are about 14 young people, ages 11-15. They call themselves the “Inklings” in honor of the influential authors (including C.S. Lewis and Tolkien) who gathered under the same name.

Connie, Anjali and Asha also had the opportunity to take a field trip to Gilette, Wyoming where they attended a speech and debate competition for the NCFCA. This time they were observers. Next year they will hopefully participate.

We also had the joy of having Connie’s Uncle Larry and Aunt Joy with us for a few days. The video of Larry singing the Super Chicken theme song is a taste of how much fun we had.

Most of my time has been spent working on our Tentmakers International Bible Training project. It is incredibly exciting, and a bit overwhelming. If you want to know more about the project you can check out our newly updated website TrainingChurchPlanters.com.

The picture is of my office. The flags are of the five countries (on five continents) where we want to start church planter training programs.

My (Chuck) office in our mission's home office. Notice the flags. 5 countries on 5 continents and 5 training programs for national church planters! Also the pith helmet is for an upcoming video (a satirical ethnography of millennials). Stay tuned! #missions

Thank you for your faithful prayers. Here is a short list of things we hope you will pray for.

We are so blessed with a supportive sending church. They have stood with us for so many years. Here is a brief message from our Pastor Tommy Jeffcott.

Never have I seen a more mission-minded church. See more about KBC at their website www.kaysvillebible.org

This past year I had the joy of spending time with the Harris family, missionaries with Tentmakers Bible Mission. Here’s a short video I put together that introduces you to this wonderful family and the ministry they have training Kenyan pastors.

Recently, as I was going through old cds I came across our first ministry video we make after the first six months on the field. While our production quality has improved many of the truths in the video are still true today. Please continue to pray for India and those ministering in India.

Hope you all have a blessed Christmas and a Happy New Year. May the greatest blessing of God’s presence be seen in every moment of 2018!

Here are some pictures from our Christmases in India over the years.